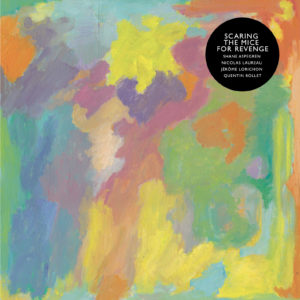 SCARING THE MICE FOR REVENGE
Shane Aspegren / Nicolas Laureau / Jérôme Lorichon / Quentin Rollet Album CD • LP • Digital 20/05/2022.
Label : Prohibited Records – Distribution : L’Autre Distribution.
There are certain records that don’t disappoint. Their timelessness immediately makes them stand out from the crowd, and the feeling of clarity that they emanate distances them from all futility. Such is the case of Scaring The Mice For Revenge, celebrating the reuniting of four longtime friends in the studio after crossing paths many times during their respective projects. Following long careers on the indie scene, Nicolas Laureau (Don Nino, NLF3, we:mantra) and Quentin Rollet rediscover each other’s artistry after working often in parallel, while Jérôme Lorichon and friend Shane Aspegren, now based in Hong Kong, take a temporary break from their well- known duo The Berg sans Nipple. Each of them has an illustrious career as a solo artist or guest spot in numerous groups – from Herman Dune to Zombie Zombie by way of Songs:Ohia, Bright Eyes and Françoiz Breut (to mention only a few). What they share is a desire to redefine their output, over and over, stay open to every possible sphere of musical experimentation, never become enclosed in any genre.

Helmed by sound engineer Johannes Buff, the recording session was disconcertingly fluid, with everything recorded in one take with no overdubs. Resuscitating the Hindu-tinged spiritual jazz of Pharoah Sanders and Alice Coltrane, the four musicians opened a rift to new constellations. Replacing the electric rage and rocky peaks, a meditative horizon formed, a quest for beauty and inner peace reacting against the chaos of the times and their tyrannical polarities. Freed of any preconceived format, the group could swerve far from the fashions and trends of the moment. Leaving behind NLF3’s guitar and Don Nino’s intimist songwriting, Nicolas Laureau went back to his sitar with the dexterity he is known for, Quentin Rollet explored the free jazz undulations of his saxophone, once an element of Red Krayola and Nurse with Wound, Shane Aspegren navigated his dizzying polyrhythms, while Jérôme Lorichon used his homemade spacedrum and oscillators to sprinkle the endeavour with discrete electronic touches. Everything seemed to point towards a miraculous convergence of musical minds improvising analogue electronica, jazznotjazz, ‘degendered’ rock and transcontinental traditions, navigating rudderless from the Nile to the Ganges, Timbuktu to Kathmandu, from the Great Rift Valley to the Indus River, from Madras to Bali.

It’s from these sanctuaries, wherein lie the spiritual treasures of civilisation, that the group gets its biggest inspiration, through ethereal, swaying compositions that almost appear to structure themselves. On Bamboo Stick Shop, a cornerstone of the album with its eighteen-minute flying carpet ride, velvety sax and sitar vibrations envelop spongey bass and carefully discreet percussion. With goosebumps still, we embark across the Great Plains with Cow Face Posturing, where the primitive oscillations form a crevice in the dusk’s half-light, into which the musicians plunge blindly, but where each element finds the others and falls neatly into place, from Rollet’s trademark breathy notes to Aspegren’s bewitching percussive gourds and bells.

Firmly attached to a loop and its dizzying variations, Birds Riding On Top Of Trucks spirals down a battered, vertiginous road with an almost groovy gait, as satisfying as any Indonesian gamelan orchestra. A Charming Snake Pit gradually develops around a tenor bell and litany of percussion that rises gradually, weaving like a cobra ready to strike. An unintelligible incantation filtered by the mouthpiece of the sax finally bursts free in Tsetse, the most ‘rock’ of the tracks, whose central riff is reminiscent of NLF3’s soundtrack for Paul Wegener’s 1915 film The Golem, a classic of silent cinema. Performed together with Finnish American Erik Minkkinen (Sister Iodine, Antilles), a noise guitarist and master of electronics, it was part of numerous cine-concert screenings in France and around the world.
It is not by chance then that Minkkinen oversees the mix here, revealing new textures through a subtle balance from track to track. Reflecting the album’s search for music both visionary and ecstatic, the sleeve art is the work of Japanese painter Yu Matsuoka, a myriad of touches of colour evoking a landscape bereft of contour. From solid ground to the cosmos, this Noah’s ark of sound brings to mind the splendour of a world facing the threat of extinction, like an ode to wide open spaces after successive confinements. Let’s hope this stateless record can help push back the evil spirits and set each of us back on course to becoming awakened beings in a world that bursts forth beauty, with or without us.